The core of this software package is a MATLAB-based simulator which runs Monte Carlo simulations of games of Settlers of Catan. Initially, this Monte Carlo simulator chooses actions at each turn by selecting a board state at random from the set of possible board states based on the player’s available moves. During training, the simulator may instead select actions using an epsilon-greedy policy based on a learned quality function. This quality function may be learned in an unsupervised manner by having the computer play games against itself, using the data obtained from these simulations to further refine the quality function.

The Classes folder contains various user-defined classes (and enumerations) important for defining the game board. The most notable of these is the Board class, which contains properties and methods related to the game board and bank, as well as enabling basic moves and transactions. More information on each class and enumeration may be found in the main file (e.g. Board.m). 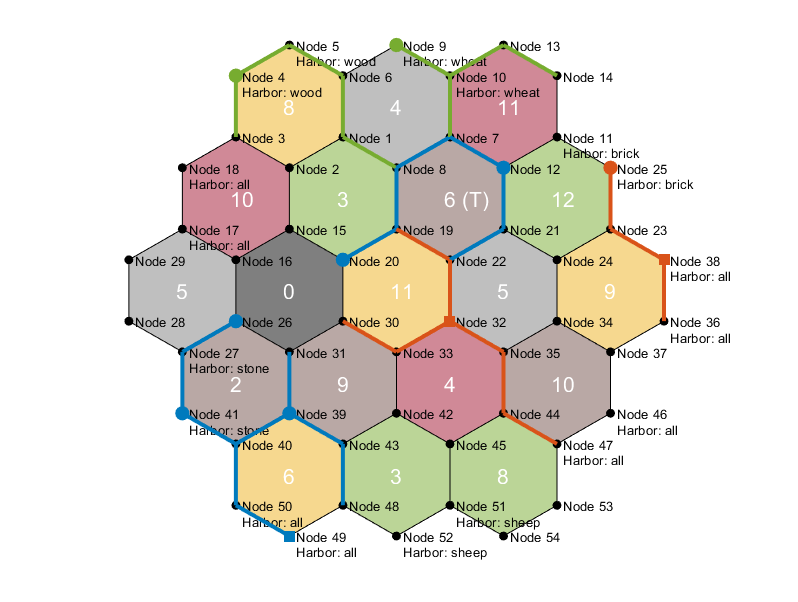 Monte Carlo simulations may be run using the function utils.runMonteCarlo(), which initializes a random game board with up to six players. The above example shows the results of running a Monte Carlo simulation with three players and a random policy. In the graphical representation, circles and squares on nodes represent settlements and cities respectively, with colored edges representing roads. The neural networks describing the quality function used by each player may be passed as an argument to this function.

The function utils.trainModel() handles training and testing of quality functions learned via Monte Carlo simulations. Training and testing is split into rounds of a specified number of games each. In the first round, a random policy is used to generate moves for each player; each move is associated with the victory point count achieved by the player at the end of the game. Upon training the neural network-based quality function in the first round, network weights are refined after each round of training by generating samples using Monte Carlo simulation with the learned quality function and an epsilon-greedy policy. The quality function input is a vector-based interpretation of the overall board state (from the perspective of each particular player), with the target output being the ultimate victory points achieved from the board state.

This function returns the trained quality function, win percentage of the model against a random policy at each round, and the data generated during training.

The file trainedModel.mat contains a trained neural network quality function which may be used in conjunction with the utility functions provided in this repository to run Monte Carlo simulations or suggest optimal moves in actual-play games. To do the latter, one may use the provided function game.gameManager(), which interfaces with the scripts in this package and the trained quality function to enable the user to play a game using the MATLAB command line interface in conjunction with a graphical representation of the game board (shown above).